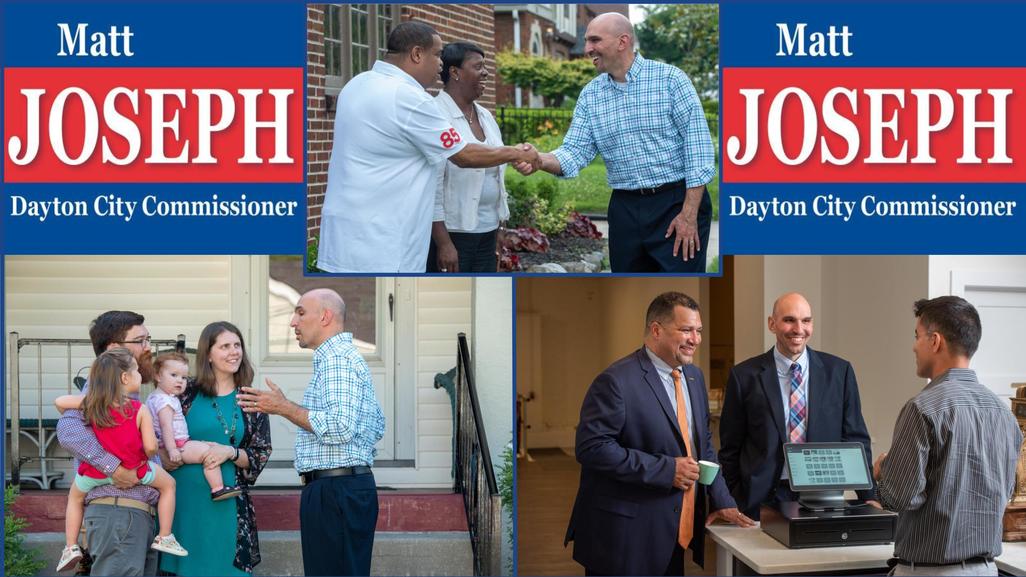 Matt Joseph was sworn in as a City Commissioner in 2004, and has been reelected three times. He brings to the Commission extensive legislative and management experience, along with a depth of civic and community service skills. He is dedicated to making Dayton a great place to live and a welcoming place to do business, especially for new small companies. As Commissioner, he has focused on improving Dayton’s housing stock and making neighborhoods safer and more attractive.  He advocated the successful consolidation of city offices into city-owned buildings and out of rental agreements, saving the city thousands of dollars every year. He has championed the development of Tech Town and other locations, where new and attractive technology jobs are being created. Along with the City Manager, he led a task force charged with finding ways for the city to communicate and work more closely with Wright-Patterson AFB. Commissioner Joseph is focused on attracting and retaining talented young professionals and entrepreneurs. He currently serves as the Chair of the Welcome Dayton Committee, a group that works to ensure that new arrivals to the Dayton community are welcomed and integrated.

Commissioner Joseph has ample experience in local government, having served as Chief Deputy Clerk of Courts for Montgomery County and as Legislative Assistant to former Congressman Tony Hall. Commissioner Joseph has experience in education and in the private sector. He worked at the University of Dayton on education and business projects designed to reinforce the peace in, and strengthen the economy of Bosnia and Herzegovina. He also served as a project coordinator for a non-profit group working to reduce the rates of predatory lending and bring homeownership opportunities to people who might not normally have them. He has worked as a consultant to NASA in the field of technology management and strategic planning, and is currently working as a logistical supporting Wright-Patterson Air Force Base.

Commissioner Joseph has been very active in the community, volunteering for a number of non-profit organizations, including serving on the Boards of the Mother Brunner Literacy Center and the Dayton Sister Cities Committee. He also serves on the Miami Valley Regional Planning Commission.  He served seven years as President of the Board of Directors of the House of Bread, and also has been proud to serve on the Southeast Priority Board, the Board of Directors of the National Conference for Community and Justice, Film Dayton, the Neighborhood Schools Centers Oversight Council, and the Board of the Miami Valley Fair Housing Center, among others. A graduate of Carroll High School and the University of Dayton, Commissioner Joseph earned a Master's Degree from George Washington University in Washington, DC. Commissioner Joseph and his wife Irena have two children, Niko and Sara.

You can join us using

Paid for by Friends of Matt Joseph

Created with NationBuilder – Theme by Tectonica